In the world of data model-driven management, what is important is the set of YANG data modules from which APIs are deduced. Indeed, from a high level point of view, I see data models as APIs. 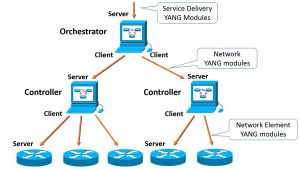 From an architecture point of view, there are multiples API locations, all deduced from YANG modules. A controller typically configures network elements (routers, switches) based on the Network Element YANG modules: typically  interfaces, routing, QoS, etc.). Note that, in the NETCONF and RESTCONF terminologies, the controller is the client and the network elements the server, as the controller initiates the configuration session. Similarly, the orchestrator configures one or more controllers based on the network YANG modules APIs: typically a layer 3 VPN. And finally, operators can access the orchestrator north-bound interface to manage their services (based on the service delivery YANG modules). More details on the different YANG module types in the YANG Module Classification [RFC 8199] and the soon-to-be-published Service Modules Explained [RFC 8309] IETF draft.

The next picture shows a YANG data module on the left and RESTCONF RPCs to edit the associated resources on the right.  The color scheme shows how to build the RESTCONF GET, POST, PUT, and DELETE methods from the YANG module, and we see that YANG keywords provide all the needed information.

The APIs for different programming language are deduced from the data models thanks to tooling. For example, the YANG Development Kit (YDK) offers python and C++ bindings. And once you deal with python or C++ APIs, whether the encoding is based on XML or JSON is completely irrelevant. 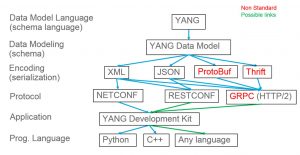 While the NETCONF protocol should be known by now [RFC6241], let’s say a few words about the newly specified RESTCONF protocol.  RESTCONF, specified by the IETF [RFC8040], specifies an HTTP-based protocol that provides a programmatic interface for accessing data defined in YANG, using the datastore concepts defined in the Network Configuration Protocol (NETCONF). Quoting the “Subset of NETCONF Functionality” section from the RFC:

RESTCONF does not need to mirror the full functionality of the
NETCONF protocol, but it does need to be compatible with NETCONF.
RESTCONF achieves this by implementing a subset of the interaction
capabilities provided by the NETCONF protocol — for instance, by
eliminating datastores and explicit locking

The HTTP POST, PUT, PATCH, and DELETE methods are used to edit data
resources represented by YANG data models.  These basic edit
operations allow the running configuration to be altered by a
RESTCONF client.

RESTCONF is not intended to replace NETCONF, but rather to provide an
HTTP interface that follows Representational State Transfer (REST)
principles and is compatible with the NETCONF  datastore model.

So what are the technical differences between NETCONF and RESTCONF?

Next to the technical differences, a tooling issue!

It’s a little bit over-simplistic to think that, if you’re a Web developer, you “just” select RESTCONF as the protocol, as opposed to NETCONF. However, I want to stress the importance of tooling. Automation in general, and specifically network configuration, implies the integration of an entire tool chain. And if the existing tool chain (for example, storage and compute) is centered around HTTP, the RESTCONF option might be best one. In the end, it’s all about seamless integration.

Operators will anyway decide for themselves but they should take an informed decision, let’s provide the information in a different format, based on their documented requirements [RFC3535]. This RFC is 14 years old, but the operational requirements in that RFC are still valid today. This spreadsheet below mainly compares how NETCONF and RESTCONF fulfill the RFC 3535 operational requirements. Some requirements (like the first one) don’t really offer a clear winner though.

In summary, even if the negative marks against RESTCONF are resolvable (*), when you have the choice, NETCONF should be used for network elements configuration , while RESTCONF might be fine as the north-bound interface of the orchestrator or/and controller.

(*) For example, we added datastores to RESTCONF. However, my view has always been: if you want capabilities similar to NETCONF, well use NETCONF 🙂